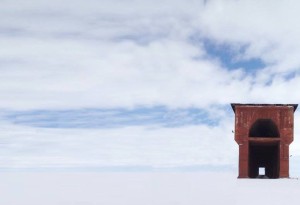 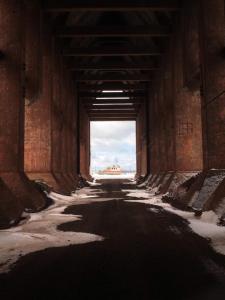 River of our substance

With the rest. River of the substqnce

of the earth’s curve, river of the substance

Of the sunrise, river of silt, of erosion, flowing

To no imaginable sea. But the mind rises

Into what is there. I know of no other

Nor have I ever witnessed it… Islands

In the rather shallow sea

Of where we are

Who are most northerly. The marvel of wave

Even here is its noise seething

In the world; I thought that even if there were nothing

The possibility of being would exist;

I thought I had encountered

Permanence; thought leaped on us in that sea

For in that sea we breathe the open

Of place, and speak

If we would rescue

Of clarity, and respect.
George Oppen 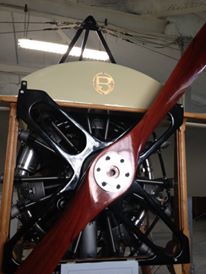 The Blériot XI was one of the most famous accomplishments of the pioneer era of aviation, built by Louis Blériot who became on 25 July 1909 the first person to cross the English Channel in an airplane.

The Blériot XI was manufactured in 1914 and was powered by a 50-horsepower Gnôme rotary engine. The airplane was purchased by the Swiss aviator John Domenjoz, a Blériot company flight instructor. Domenjoz earned a reputation as one of the era’s most celebrated stunt pilots, performing in major European cities and in North and South America through 1916, at which time he returned to France. Following wartime service as a civilian flight instructor both in France and the United States, Domenjoz made one final barnstorming tour with his Blériot in 1919.

This was the WORLD’s First Military Aircraft. It was first used operationally in Mexico during the 1910 Mexican Revolution (Lit Dynamite was thrown out of the cockpit) and later as the World’s first Operational Bomber in the Italo-Turkish War of 1911-1912. According to the Hague 1899 & 1907 protocols, attacks from the air were considered WAR CRIMES (civilian or military). The Bleriot was considered a FRONT LINE Aircraft of the Balkan Wars (1912-13) and was used in WWI (1914-1915).

Another important “first” was the 1910 flight over the City of Montreal by Count Jacques de Lesseps in his Blériot XI christened “Le Scarabée”.

10 volunteers’ amateurs in Canada spent 14 years to build a replica of the Blériot from a German set of plans, because the original French set of plans was lost during the WW II. And is now exposed at the CCPA Aviation museum in Montreal.

This replica flew during 14 seconds because the Bleriot is only flown on the calmest of days and then only in a straight line and a few feet above the ground, then lands and is turned by hand for the return trip. Control is too weak to allow in air “aerobatics” and they treat these aircraft with the greatest respect.

In this exposed replica I’ve noticed an extended rudder with a float on the bottom (picture number 5) and one of the volunteer named Michel, explained to me that Louis Blériot did it in case the airplace crashed in the high sea; he would be able to survive by making the airplane float on the water, but no one know what was the material used, probably wine corks. 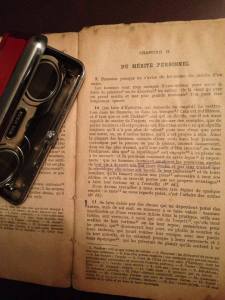 This old edition belonged to my father; more than 15 years now since I’ve read it for the first time. This book contains a treasure trove of timeless and increasingly timely pointers on the necessary art of living up to our social destiny and personal Merit.

I’ve learned that the personal merit is silent and doesn’t need to be reconized…and I’ve learned to not give my time to every superficial acquaintance: it is bestowing what is to you of inestimable worth, upon one who is not likely to be the better for it.

And I’ve learned that the personal merit consists less in the display of one’s own wit and intelligence, than in the power to draw forth the resources of others; he who leaves you after a long conversation, pleased with himself and the part he has taken in the discourse, will be your warmest admirer. Men do not care to admire you, they wish you to be pleased with them; they do not seek for instruction or even amusement from your discourse, but they do wish you to be made acquainted with their talents and powers of conversation; and the true man of genius will delicately make all who come in contact with him feel the exquisite satisfaction of knowing that they have appeared to advantage.This requires great genius and few are gifted with the talent.